Police brutality on students of Jamia University in Dehi (JMI) has sparked support protests of other university’s students across India.

JMI students claimed that their protest was peaceful until the Delhi Police started lathi charge to “control” the crowd. Students alleged that police entered the university and continued with lathi charge injuring many, including female students.. They also fired tear gas shells into enclosed spaces.

In a widely circulated video, a female law student Anugya from Ranchi alleged that police raided the girl’s hostel and beat the students. There are unconfirmed reports of police switching off the light before starting sexual assault on female students.

Local media also reported that police were dragging students out of a mosque inside the campus. They also beat the Imam and the university guard who tried to stop them.

An ambulance driver told Scroll that the police attacked the wounded and were refusing to let them go. He said that more than 100 students were injured in the violence.

According to activist Yogendra Yadav, at least 125 people were badly injured and required treatment.

The police denied firing inside the campus, though videos that emerged later in the evening showed policemen using rifles. It is not clear if they were using rubber bullets.

Students also said they saw men wearing uniforms that were not those officially worn by the Delhi Police, and there are unconfirmed reports of Hindutva goons participating with police to beat the protesters with sticks. 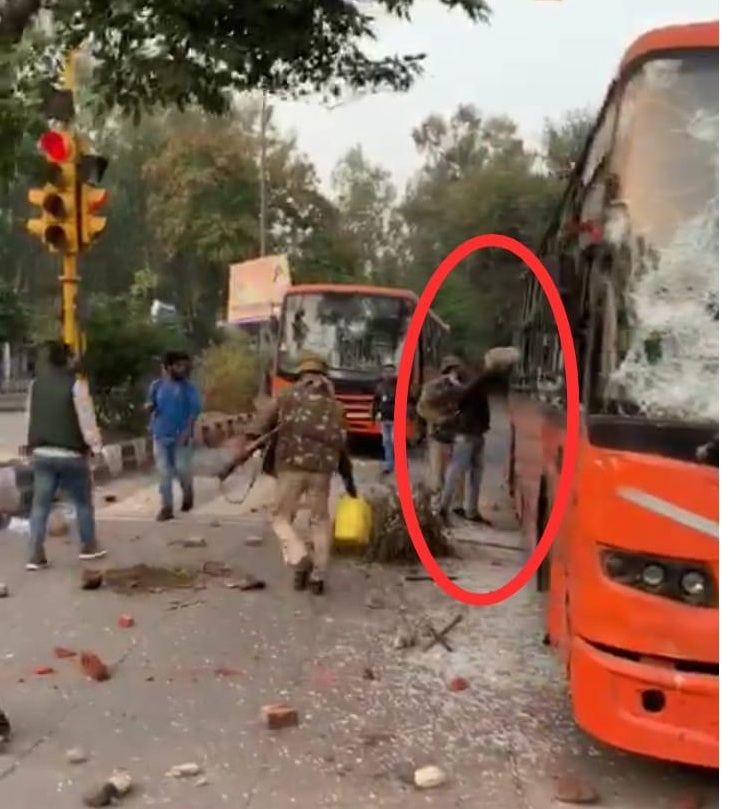 Police in Delhi was reported damaging and burning a bus while, in a widely circulated video, UP police can be seen damaging motorbikes with their batons. 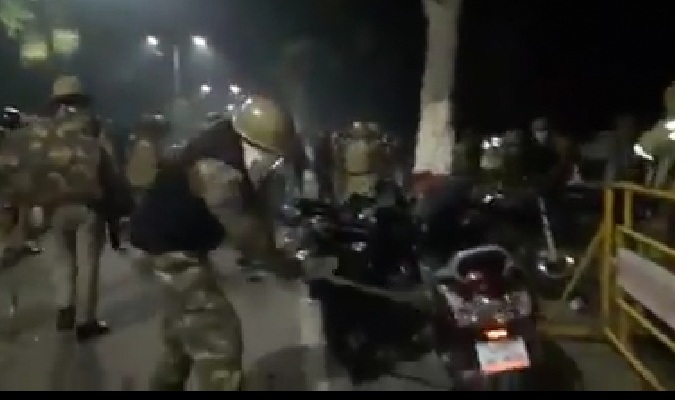 As reports of police brutality emerged, students across the country began protesting and condemned the police’s actions.

Students of IIT Kanpur has planned a protest at 2 pm on Tuesday to express solidarity with the students of JMI, according to reports.

According to Scroll, students of Tata Institute of Social Sciences (TISS) decided to boycott their classes to protest the violence in Delhi. Students sang the patriotic song ‘Sarfaroshi Ki Tamanna’, an ode to the freedom fighters of the Indian independence movement written by Bismil Azimabadi.

Students of Jadavpur University, West Bengal held a midnight march against the violence and said they condemned the “brutal state terror on the students of Jamia Millia Islamia University”.

The University of Hyderabad also held a flash protest against the violence.

In Hyderabad’s Maulana Azad National Urdu University, the students union decided to boycott the scheduled semester examinations. The Union’s resolution said that the students are planning to protest the Delhi police’s alleged violence against JMI and AMU students and requested the administration to postpone the exam, reported Scroll.

What prompted these protests?

A Citizenship Act Bill (CAB) passed by the parliament, to speed up the naturalisation process for refugees from Afghanistan, Pakistan and Bangladesh. CAB will be implemented in conjunction with National Register for Citizens (NRC).

New law will allow citizenship for Hindus and other minorities but excludes Muslim refugees. Critics say the law, which does not make the same provision for Muslims, weakens India's secular foundations.

The law's enactment on December 11 has stirred up protests across India, but the eastern part of the country, where resentment towards Bangladeshi immigrants has persisted for decades, has been among the worst hit. There have been demonstrations in the Indian capital since Friday.

On Sunday as protests against a new citizenship law continued for a fifth straight day across the country.

At Jamia Millia Islamia University in Delhi, where slogans such as “#SecularIndia” were graffitied on buildings, many students told The Associated Press that the police fired tear gas inside the university’s library and beat up protesters before sealing all campus gates.

“We were treated like criminals. Scores were injured and I escaped from the campus to save my life,” said student Tufail Ahmad.

The students said that the police were “uncontrollable” as they beat them. In some places, the lights were switched off. “Even empty buildings were raided,” a student said. “Some policemen entered the toilets and attacked students.” 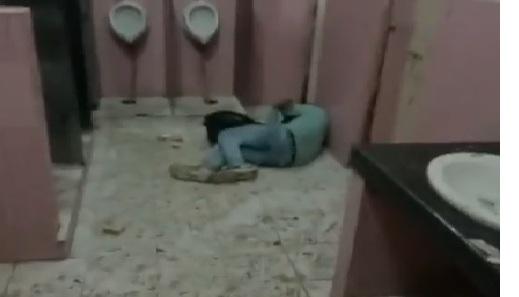 A video showed a student lying unconscious on the floor of a washroom, while another student cowered in a corner, his face covered with a blood-stained cloth.

Waseem Ahmed Khan, a top official of Jamia Millia Islamia University.said “our staff and students are being beaten up and forced to leave the campus,”.

“Police have entered the campus by force, no permission was given.” said Waseem.

While the exact timeline is not yet clear, it seems the Delhi Police entered the university campus at around 5.30 pm. Every student that Scroll.in spoke to asserted that the police action was totally unprovoked. When the students were attacked, they said they started retaliating with stones.

Police officials at the spot claimed their action was in retaliation against the stone throwing by the students inside the campus.

At close to 7 pm local time, Delhi police said the situation was under control.

Meanwhile, protests against the Act continued in parts of eastern India.

Indian PM Narendra Modi, while keeping quiet about protests in Eastern states (mostly Hindus and Tribals), was quick to point out the dress of the protesters in succeeding protests in other parts of India (being mostly Muslims).

Home Minister Amit Shah on Sunday called again for calm, saying local cultures in northeastern states were not under threat, amid fears the new law will grant citizenship to large numbers of immigrants from neighbouring Bangladesh.

Modi's Bharatiya Janata Party (BJP) ally in Assam, which had supported the bill in parliament, told local media on Sunday that it now intended to challenge the law (CAB) in the Supreme Court.

*Opinions expressed in this article are the author's own and do not necessarily reflect the views of UMMnews.

This is an open access article distributed under the Creative Commons Attribution License which permits unrestricted use, distribution, and reproduction in any medium, provided the original work is properly cited and the original source www.UMMnews.org is acknowledged.